I have always been obsessed with making things by hand and I have always been obsessed with memories. I wanted to make something, by hand, where I could record my memories of high school for the future. I’ve always been inspired by old fashioned things, so I knew right an way that I wanted to make a cover for my scrapbook out of a leather-ish material and I wanted a way to secure a close to my scrapbook. Thinking about color schemes, I considered the brown leather and which colors would look good with it and I decided on a color scheme of blues and neutrals. I started out the process of making my scrapbook by making my own paper, followed by preparing the paper, and binding the book.

The documentary project was a combined video project between Physics and Digital Art. For this project, in groups, we decided on a topic that has to do with an environmental issue our world is faced with today. We then researched the topic, gathering information to build an argument for the video. Each member of the group interviewed at least one person about the the topic to include in the documentary. With a combination of original and borrowed footage, we edited our video, building a story for our argument.
Why do artists produce preliminary plans?
Artists produce preliminary plans to get an idea of what they want their final product to look like and to see that their project includes every desired component that they are looking to include. Planning before you actually start your project allows you to look at what you already know you have a plan for and think about what you might be missing.

What is old, and what is new in art?
​In art, concepts remain constant, but its how those concepts are used that determine whether they are old or whether they are new. Using concepts of art in ways we are familiar with, ways that have been done thousands of times before is old, you are only recreating what’s already been done. While, taking these concepts and present them in ways that haven’t been done before or have only recently been accomplished in the smallest amount, that’s what makes art new. 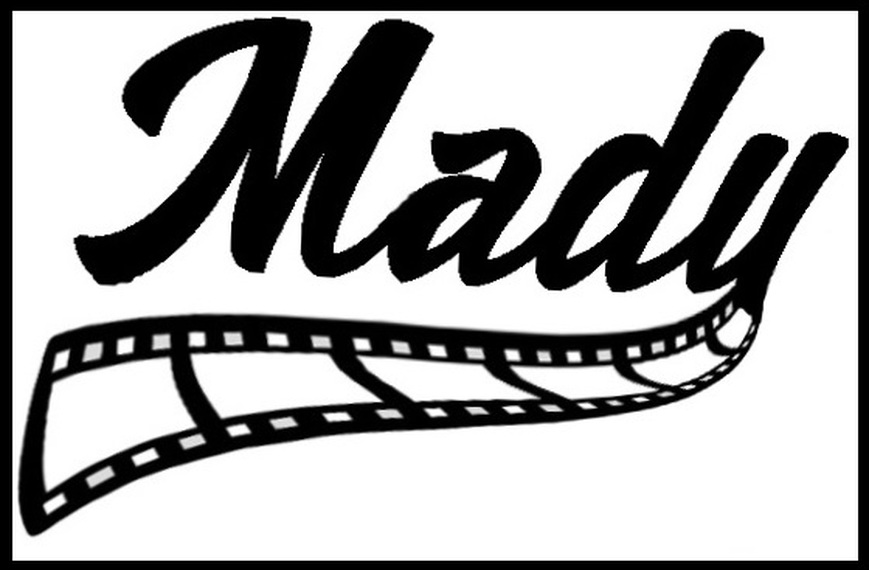 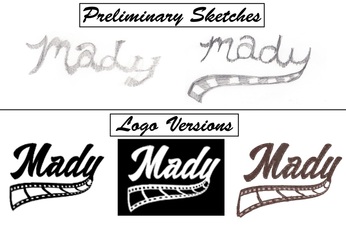 Reflection:  I feel like this project has allowed me to have an understanding of the effects that choices in a logo effect the image of what they represent. The font, the thickness, the accents, the embedded imagery, and all other decisions made in the creation of a logo take effect on what the logo says about what it represents. Understanding this has allowed me to think about what kinds of messages I wanted to portray myself as and I did my best to try to represent these concepts in my logo. Mainly, I wanted my logo to portray me as professional, yet fun and passionate, yet open. I wanted my logo to portray myself as an actress, seeing as that is the career I would like to have for my self when I get to the adult world.  To try to capture all these ideas that I wanted my logo to embody, I began with writing out my name. When looking at my name and thinking about expressing myself as an actress in my logo, I came up with the idea for the "y" at the end of my name to fade into a film strip. Although I have yet to act in film, I feel this really represents myself as an actress.  To express professionalism, I selected a text font that to me resembles this idea, without having the logo portray myself as strict to give a more fun and loose feel to it. To show passion, I wanted the film coming from the "y" to feel much so apart of the logo and to do this, I made the film extend under the rest of the letters and seem fairly proportional to the rest of the logo and to ensure that my logo still gave an open feel by side this idea of passion, I left a reasonable amount of space between the film and letters.  Personally, I feel the logo I created portrays myself as the actress I hope to become and plan on using this logo in the future. 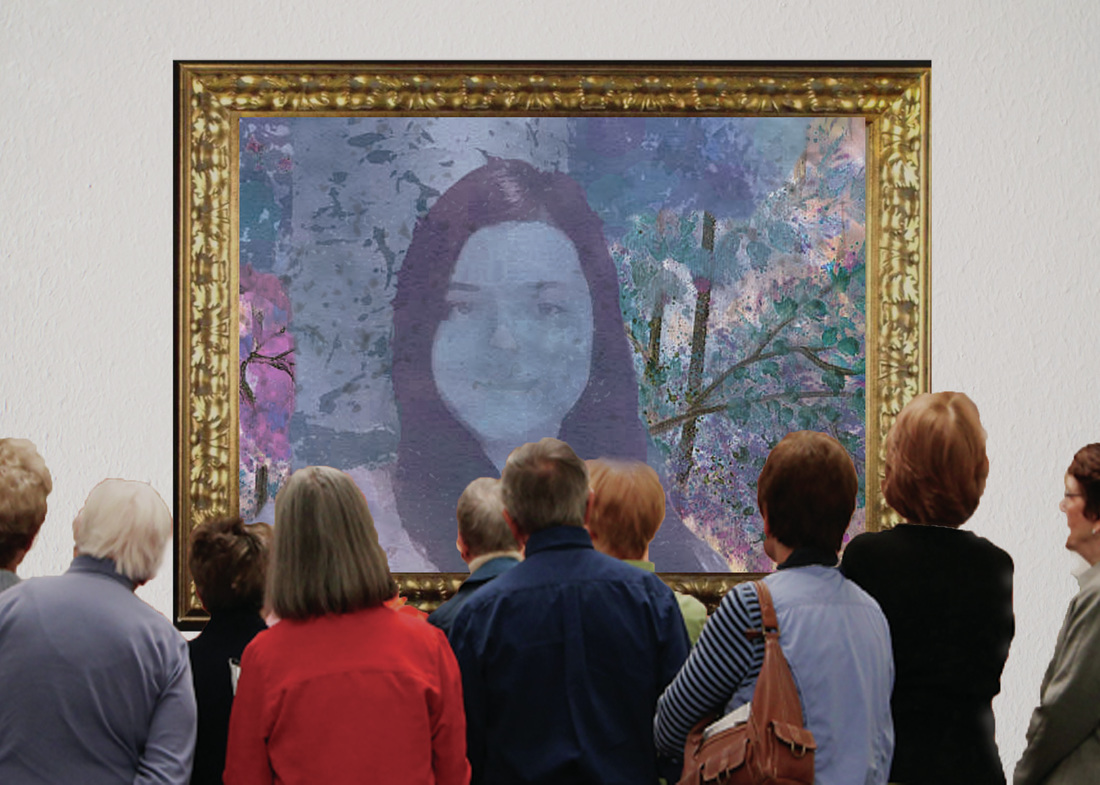 ​         For my self-portrait, I had originally wanted to portray myself as an artist and I wanted my project to look "good".  Then, Roxy asked us to think about what kind of emotion does your self-portrait give. That made me look at my project and it allowed me to realize that the self-portrait that I had originally made, although it did express me as myself, it didn't reflect the emotions that I have hidden deep inside of me that make me who I am. When that came to me, I know I had to incorporate it into my project and I found in myself that the biggest emotion that I face that greatly effects who I am is judgement. Not only am I shaped by the judgement of others, but I am constantly being shaped by the judgement I made of myself. I am critical of myself and I feel like that is one of the most valuable traits that I have as an artist and as a person because it allows me to look at myself and see what more I could do to improve and what about myself I really like.
When is art criticism vital, and when is it beside the point?
Criticism of art is vital when it helps the artist to better portrait the effect that the artist is trying to express to the audience. Art criticism is beside the point when it specifically targets the artist them-self. When criticism is truly helpful, it allows the artist to receive feedback on how to better their art to properly send the message out to the audience that they are trying to express. When criticism is not in itself truly helpful, it doesn't give the artist any area in which they could grow, improve, and better their work and or hurts the artist rather than allows them to feel good about where they can go with their art.

What problem solving skills are employed in making visual reflections of self?
In making visual reflections of the self, you need to move past the problem that society has ingrained that when portraying the self, you have to portrait yourself at its best, as happy and beautiful. You need to move past that and realize that the self is not perfect and that a true reflection of the self would mean portraying it as something that is not perfect, but that is true. Then to deal with the problem of discovering what that reflection of the true self is. Then simply to portray that visually through art. ​ 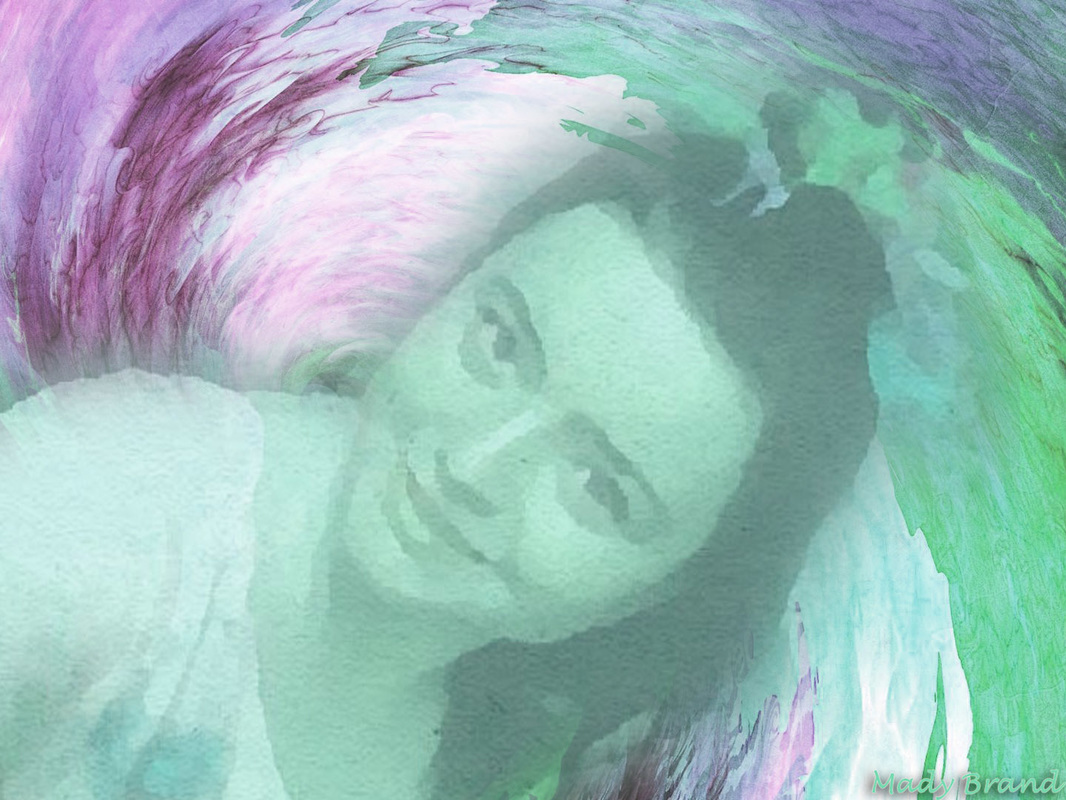 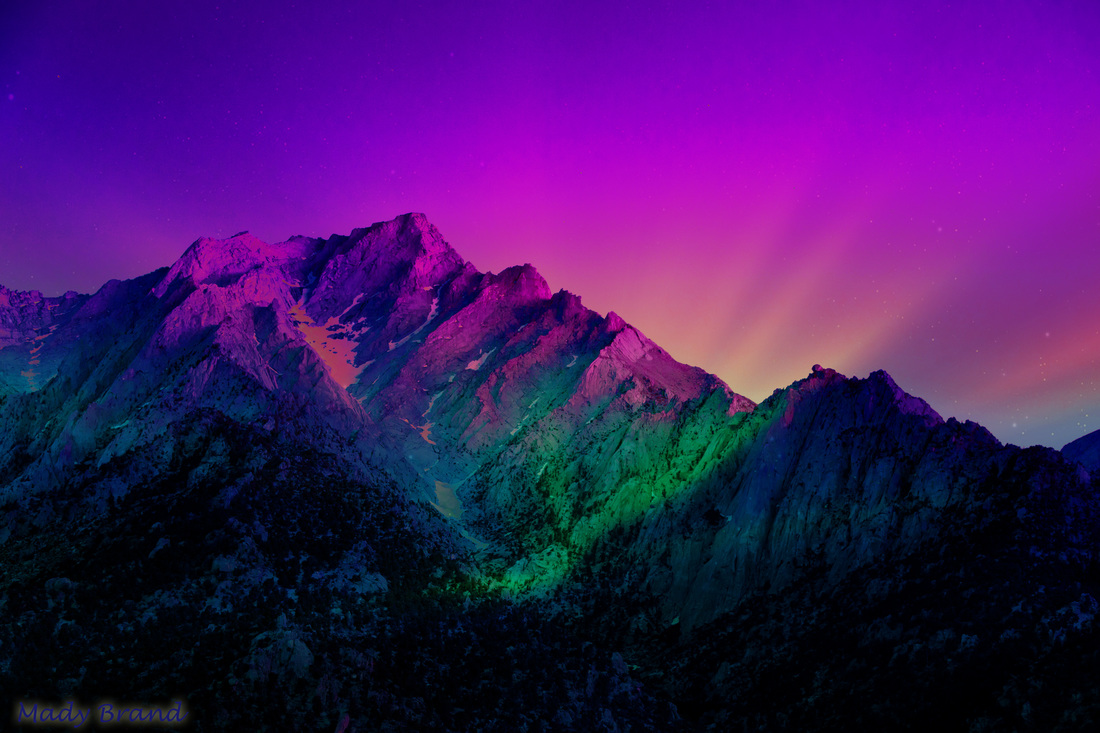 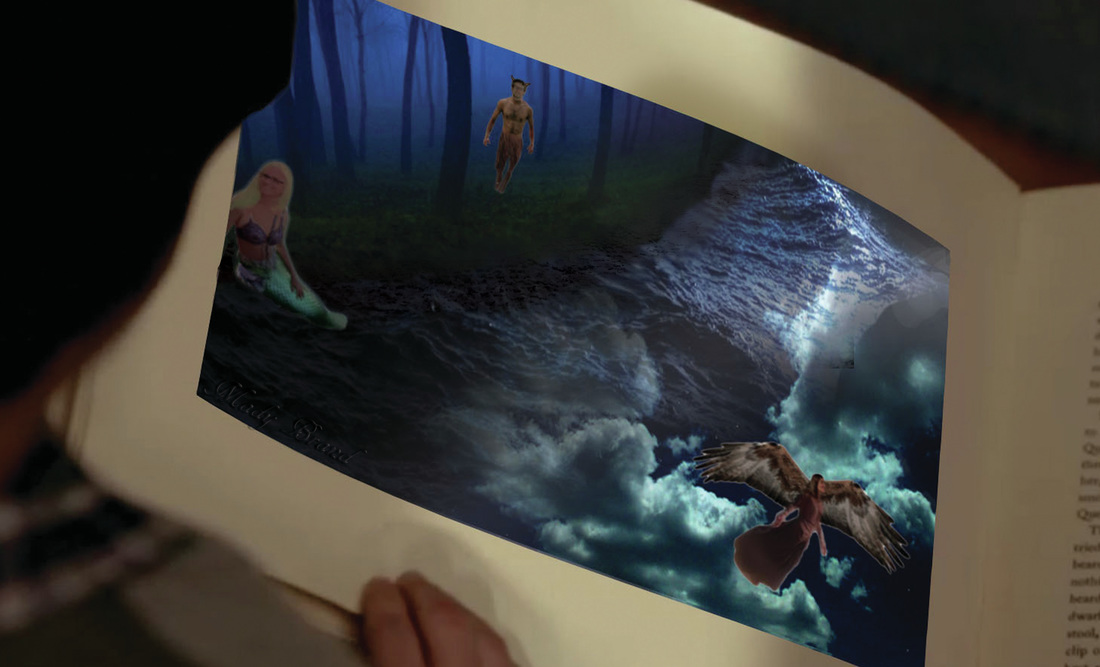 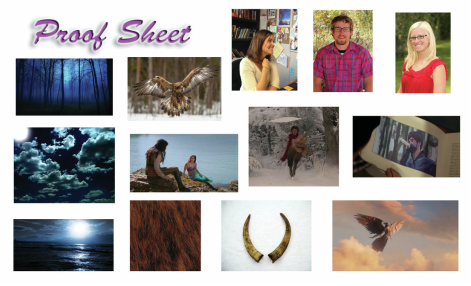 ​           In this project, I first dealt with the background by warping the forest scene to appear as an island on the ocean scene, erasing the bottom right corner of the ocean scene, placing a highly feathered version of this on top of part of the night sky scene, and then placing a highly feathered version of the night sky scene with the “multiply” setting on top of all of it. Then, I crafted the characters by taking the parts that I need to create them, putting them together in a separate document, blending them together with the blend tool and hue selection, and added any additional refinements necessary. I refined the edges, copied and pasted them onto the background. I then changed the lightness, saturation, and hue of the characters to better fit the background and made any other adjustments that seemed necessary. When that portion of the project seemed pretty good, I saved it as a jpeg and copied and pasted it onto the image of Henry’s book. I changed that layer to the multiply setting, so that it was somewhat transparent, and used the warp tool to align my teacher creature image to the images in Henry’s book and once it was aligned, I changed the setting from multiply back to normal. I then made final adjustments anywhere that needed it and hid my signature in the image. The hardest part of this project was when my first background image vanished. I had saved my background image and was working on it when it just disappeared and I couldn’t find it in the folder that I saved it in, in the recycling bin, or anywhere when I searched for it. I was upset that all of that work had been lost, but having already been through the process, it wasn’t too difficult to recreate the work that had been lost. I learned that when it comes to art, I really like giving my work a mysterious feel to it in fantasy settings.

​Foreground, Middleground, and Background in Photoshop: 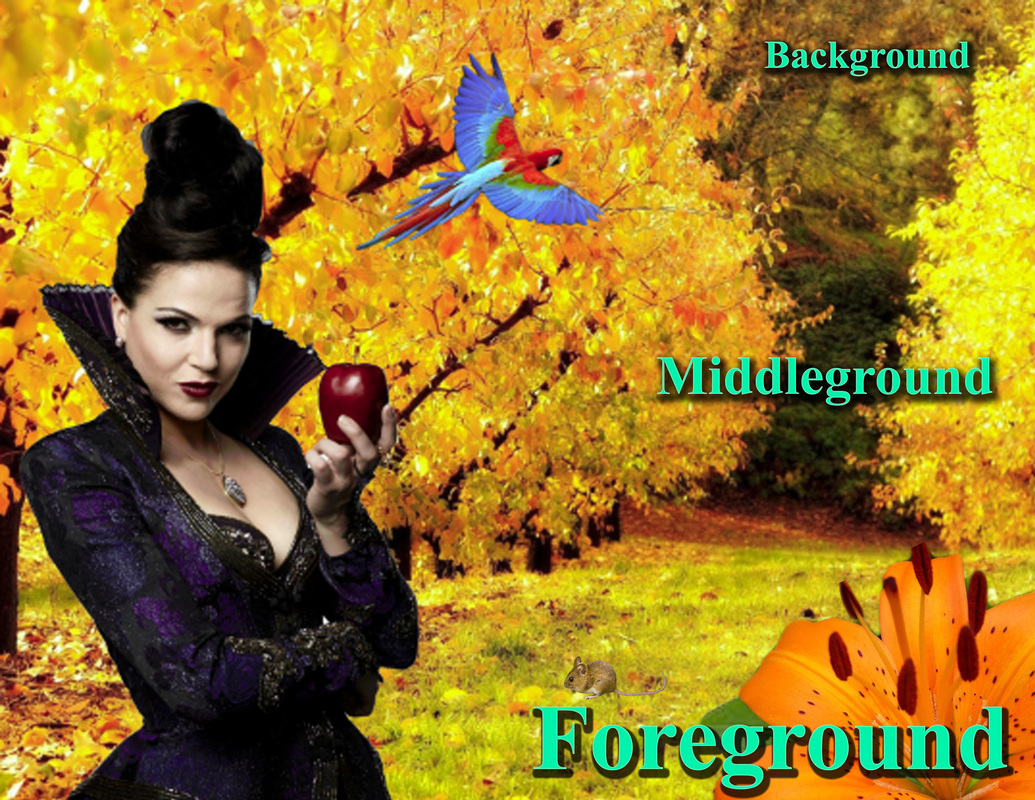 ​The Elements and Principals of Art and Design Project: