The purpose of the project was to apply old and new knowledge of deoxyribonucleic acid to a story that we could tell in a film, answering the question: what makes individuals unique?As an individual, I met this purpose in the story telling part of this project. As the director of acting, I advised actors on how to portray their characters and I advised the team on how to best tell the story, including science sections. As a class, we created a film that told the story of a girl with cystic fibrosis, though our story was not set in the modern day world, we still looked at genetic concepts relevant to us today.
I am personally proud of how I handled directing the actors. I applied my knowledge of how directors deal with productions, the support I wish I could have had from directors in the past, and my knowledge of film acting.  Though I will never know whether they used them or not, I’m glad that I provided lots of resources for the actors. Also, I’m glad that I was mostly able to provide the actors with a professional experience, especially with the auditions. I think our class did well with collaboration on this project. We had people serving each role and each function of the process in order to create a film and though we did not finish our film, we still created a wonderful product together. Sometimes, we needed to make sacrifices to accommodate each others needs, besides accommodating just our own.
I had challenges accepting the fact that not everyone was willing to make this film as it is done in the professional world. I tried to make the experience of creating our film as professional as I could, but sometimes I had to sacrifice that because we didn’t have what doing so would require - in most cases, time. As a whole class, the biggest challenge we faced was getting stuff done. Often, by the time we were prepared to film a scene, there wasn’t enough time to completely film the scene within the time we had that day. Since there was no pressure of getting graded for assignments, when you asked someone to do something, they would almost always put it off for a long time or completely ignore it. In the future, as a class we could better deal with our challenge of time by having a space dedicated to our class’s film where we could set up one day and film the next rather than cram both into a single class period.
I’m impressed with how I handled collaboration in this project because I did work to accommodate the needs of other and compromised when necessary. Though, in the future I would like to be more of a leader. I would like to take responsibility and make reasonable decisions on how to move the group forward. If I were to change this project, I would make the science component clearer. I feel like I learned a lot from this project, but very little science. I think before coming up with a story for the movie, a scientific topic should be chosen to study and the rest of the project should be built around that. I really liked that everyone got to fulfill a specific role of their choosing in this project. I was more invested in this project because I was doing something that I wanted to do. Also, I liked that we completed this project as a whole class. The documentary project, last year caused lots of problems for me personally and academically, but with the whole class there to support each other, I felt so much better about creating another film. 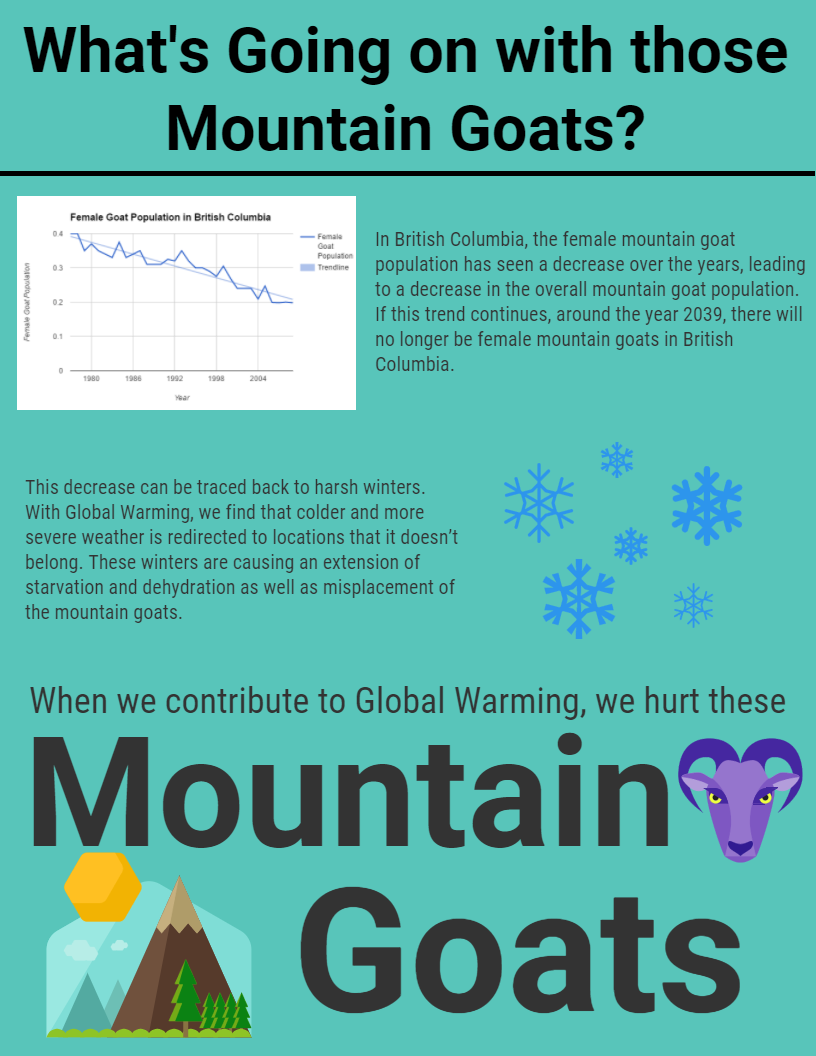 Knowing that I have a history of being controlling in group projects was particularly useful for this project. At first, having this knowledge was quite a challenge.  I knew that coming into this project I didn’t want to do the project all myself - and I didn’t want to just send my group mates off to do “chore” tasks. I resisted the urge to tell my group what to do and take over, but this lead me to not know how to complete a project without doing so. I consistently asked my group what they wanted to do with the project and even though I found it hard to conclude what it was that we wanted to do, I resisted from making decisions for the group by myself. I also made sure that I was only doing part of the work rather than all of it. It was difficult to keep myself from making the project everything that I wanted it to be - without overpowering my group members - but doing so allowed me to actually get through a group project without turning it into my project.
Next to resisting from controlling the project, the most significant thing I did in this project was advocating. Many times throughout this project I consistently found myself not knowing what to do; part of this was because I was trying to make sure that I worked with my group and the other part was just pure lack of understanding. In this case, when I was lost and when our group was lost, which happened alot, I asked for guidance. This project confirmed that I’m most certainly not the best at being a part of a group project, and because of this confirmation, if I could do this project again I would move to the next level beyond just not controlling, I would like to take part in leading the group through the project. As far as the subject matter of our project, which changed several times, I learned that the high concentrations of wind at higher altitudes contribute to a lack of trees, and that global warming is impacting mountain goats. This leads me to believe that it’s impacting other species, which at first seem to be very far from its effects as well.
​               Discovering that I do have the power to resist from dominating others and rather work alongside them is the most valuable experience I gained from this project - which will definitely be useful in the future and the present. For all opportunities to come and the ones that are going on now, I now know that if I try, I can operate equally and fairly with my group members. If I had already possessed the skill of collaboration, I could have focused less on learning how to collaborate and more on the actual project itself. I don’t regret dedicating this project to working on this skill because it’s a skill that I’ve wanted to work on for a long time, and I finally had an opportunity to with this project. With that in mind, if I already possessed this skill prior to the project, I do believe that the project would have had a better outcome, but it would not have had the same impact on my character as it did the way I chose to go about completing it. I generally learn best through a combination of seeing something be done and doing it for myself. Having never been expected to find research before and never being shown how to do so, that was the biggest obstacle I faced when trying to complete the actual project. So, from my experience, this project was less about being shown how to do something and more about just doing it. In the future, next to continuing to work on the development of my collaboration skill, I would like to ask less of “what to do” when advocating and more of “how to do it”.